Public Opening Times: Daily between 11am & 3pm | Dog walking times between 10am & 4pm

We adopted Bruce from WARS almost 6 years ago in October 2009. He was 6 at the time and had been with you a while due to his ‘problems’ with other animals, but myself and partner fell in love with him immediately, and couldn’t wait to take him home. Bruce has become a huge part of our family, and has helped us through some difficult times. 4 years ago our son Jakob was born, originally we were worried how Bruce would react, but they have been best friends since the day we bought Jakob home from the hospital. Bruce is nearly 13 now, and although he is getting greyer by the day he is still happy and healthy and very much loved.

Thank you for Bruce

Honey left wars to live with me in 2012. She was 1 year old. She has grown up a bit more now, but still super speedy and champion Frisbee catcher. She loves a good chase with another dog, but they need a bit of stamina to keep up…….. of course she does need a little lie down afterwards!

I adopted Paul from WARS at 9 months old he had his issues Hyperactivity and general social problems.

Paul will turn 7 years old on 24th September. Whilst still being very hyper he is a loving contented dog loves people and playing ball.

Dingle, who is now called Bobby, has settled in really well with his owners and their other Collie called Meg.

Bobby does enjoy Meg’s company and always walks by her side although Meg will not share her bed with Bobby!!

Bobby has been to the vets for a weigh in and has gained 2kg and starting to look like a healthy, happy Collie. Bobby enjoys his two walks every day and walks well both on and off the lead. On one of their walks there is a ginger cat that comes over to Meg and Bobby to say hello and Bobby has a sniff before moving on.

Bobby has stopped spinning and chasing his tail and has become a relaxed happy boy. His owners said he seems bigger and full of personality.

We adopted Twiggy in November 2014 and it was the best decision we’ve made to date! She was found as a stray in Malvern and I instantly fell in love with her even though I never set out to adopt a dog when visiting my WARS with my friend (she was looking for a cat). She is the most loving little dog and always eager to please. She responds so well to commands now and loves her little life in the country. She adores my other two dogs and even puts our grumpy old Jack Russell, Malcolm in his place! She loves nothing more than a comfy sofa curled up with her doggy pals after a long walk in the field by our house. As you can see from the photo she’s a busy little dog and quite enjoys a pamper at the groomers (bottom right photo) even if we did think she was a different dog after her big haircut! Thank you WARS for letting us have Twiggy in our lives, you do a fab job for those animals who future can be uncertain.

Sox has mastered the microchip cat flap so is coming and going most of the daylight hours! Jenny is not really bothered about going out, she will go on the patio or for a wander round, if she finds a door open! She has now mastered the cat flap both ways although she doesn’t want to go out much, its to comfy in the house.

They are really showing their personalities now. Sox is turning into a lap cat (or on the table/my laptop) if she wants fuss! Jenny will jump up on my lap but not actually sit down!

They both come in and sleep on the bed (or on me) if Joe leaves the bedroom door open in the morning!

Betty has been with me for about 5 months now and has settled in better than I could ever have hoped for. Due to the unfortunate circumstances when she was abandoned at the W.A.R.S. shelter she was in a very bad place and found it extremely hard to trust anyone. She was very frightened and wouldn’t allow anyone near her. However, due to all the hard work of the staff and volunteers at the shelter, she got to a stage where she could be rehomed. An article was placed in the Malvern Gazette to ‘advertise’ her for rehoming. I did not see the article at the time. However, in mid November, my previous Jacky Russell Holly passed away, (at the age of about 17 years) and home seemed very empty without her. Holly was also a rescue dog from W.A.R.S. and we had had her for just over 10 years. Holly died on the Friday, and on the Sunday morning my niece and I visited the shelter to look for another dog.
As soon as I saw Betty I knew that she would be the ideal dog for me. Even though I was ‘warned’ that she had a tendency to snap at people she didn’t know, my experience with four previous Jack Russells told me that there was a lovely little dog waiting for a new home, and that all she needed was love and T.L.C. Due to the fact that Betty had suffered such a traumatic experience in being abandoned, it was arranged, that I have her at home for a day to see how we got on together, then another day, then a few days trial. All went well and I then took her on a ‘fostering’ basis for another week and then I officially adopted her during the first week of December ‘15. I have to admit that AT FIRST, I was a little worried about approaching her, and even putting on her lead, but I needn’t have been. I found the best way forward was to let her come to me, and to make sure that I had her attention before trying to approach her, and slowly but surely she came to trust me. She is also good with visitors to the house.and when out walking she takes very little notice of other dogs. Many people we have met whilst out walking have said what a lovely little girl she is! everyone wants to pet her, but sadly, due to her experiences I have to warn them to be very careful…….. It has to be said that Betty is rather lazy!. she will lie in her bed until she KNOWS that I’m ready to take her out, then will make a dash for the door. She is very affectionate to me and the family, very much a Lap Dog and likes nothing more than lying on my lap for a cuddle.! (which is exactly where she is as I type this……) Thank you W.A.R.S. for all the brilliant work you do and for letting me have Betty.

Nellie has now started to go out in our enclosed garden - she doesn’t go far and definitely not up to scaling fences but she obviously loves being outside! She has certainly calmed down a lot and now shows her very loving side. She sleeps on our bed at night and seems extremely happy. We love her loads and are so pleased we have persisted even though she’s known as Biffa Nells! Here’s a pic of her chilling out. Thanks again for bringing Nellie into our lives and I hope you are continuing to find loving homes for cats and dogs alike with the wonderful work you do.

Effie is quite simply brilliant. She has bought us so much company already and shown such great love and affection. She has done something every single day to make us smile! She has established her favorite sleeping spots (snuggled under the bed being one of them!) but she likes to join us every evening for a play and a cuddle on the sofa. She is relaxed and rarely shy - a bit different to how she was first described at the home.

She is eating, sleeping and toileting as expected (used the litter tray every time and no accidents!) and thoroughly enjoyed a little bit of tuna on Monday as a birthday treat (it said in her notes that was her DOB?!). She hasn’t been outside yet although her cat flap and collar are both fitted ready to go. We are hoping to introduce her gradually to the garden over the next few weeks. She loves rolling over and being stroked; if we stop too soon, she lets us know with a little nudge or two! She also likes to ‘prey’ on her little mouse toy, but we are trying to encourage her to use the scratching post a little more!

Tom and I would like to thank you all for making the rehoming process so straightforward for us and for answering so many of our questions during the adoption process. We think the service you have provided is fantastic - you all do great work! We are delighted Effie could join us in our home. 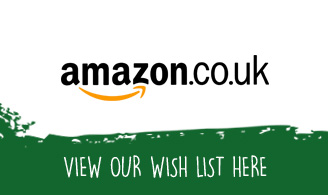 There are many items which we require all the time for the everyday running of the shelter. So if donating money isn’t right for you, then please have a look at our Amazon Wish List